Without the stainless steel chimney pipe inside the masonry chimney, there are usually problems. Acidic residue and excessive moisture break down masonry. When this happens cracks can form which can allow toxic gases to enter the home. When deterioration starts taking place in a masonry chimney blockages can form in the chimney. Blockages in a chimney can spell disaster for a home and those who live inside it. 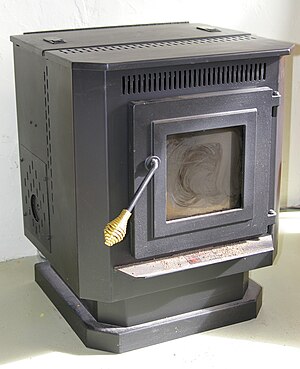 Click here to purchase a chimney liner for a pellet stove.

The incomplete by-product of combustion of fuel oil is unburned carbon & sulfur dioxide simply known as “oil soot”… Oil soot accumulates on the walls and at the base of the chimney, which warrants it be inspected and cleaned annually as suggested in the National Fire Protection Association’s 211-CODE.  All though this is not a law, and the code has not been adopted in some states, the code was designated to help homeowners safeguard their home heating unit and contents from “puff-back” which can create an oil mist that settles throughout the home resulting costly professional cleanup.

A big misconception on many homeowners’ part is that the oil service company takes care of the chimney. The oil burner company may shovel out the base of a brick chimney and brush out the connector pipes, but they will not clean the chimney. Most furnace technicians fail to mention anything about the chimney leading homeowners to believe everything is fine. Some oil furnaces service men even tell the homeowner that the chimney is OK without inspecting the entire chimney, which includes going to the roof and inspecting the interior as well as the exterior masonry (if applicable), flashing, chimney cap, etc. The National Fire Protection Assoc. 211 codes state that “chimneys must be inspected and cleaned as necessary annually” – just like the oil service man services the furnace annually, so should the chimney system be serviced annually. Many homeowners also may not be aware that the chimney’s interior, when not maintained, will decay and break down. For example – just like neglecting your teeth and not having them checked annually may result in cavities. (Or if you don’t change the motor oil in your car for 50,000 miles, you can be sure something in the motor will breakdown.) It’s the same theory with your chimney. As stated earlier, the incomplete by product of combustion is soot, which contains carbon and sulphur. Sulphur, when mixed with rain water (from a missing rain cap) or moisture from the flue gases themselves is absorbed into the flue tile and starts a deteriorating process called flaking or spalling. Just like tartar on your teeth, annual brushing will remove these soot deposits and keep the deterioration process to a minimum.

In metal chimneys the interior lining is made from single-ply or 2-ply stainless steel, which will not rust, but will corrode from the oil soot’s sulfuric acid reaction over time if not cleaned annualy. This corrosion makes small pinholes, which will ruin the integrity of the liner, which will not be able to hold the by-products of combustion. When a clay lining in a masonry chimney flakes or a metal chimney’s insides corrode, they are unable to contain the heat and the flue gases, thus creating a potential fire and health hazard.